tell them I died of a broken heart…

Luna Tart is participating in a night of Wine Women and Song. Feb 22nd with Art Alliance Austin. Here’s the link http://www.artallianceaustin.org/events/art-night-austin-2014

There’s going to be Sky Candy darlings and lots of visual artists and we’ll be traipsing about between the Women & Their Work Gallery and the Scottish Rite Theater.  Sounds like a blast and I do hope to see you there. I’ll meet you at the bar.

Hello World – we’ve started a new year!  I’ve crawled out from under a rock and it’s 2013. How the hell did that happen. I’m getting over the disappointment of NO apocalypse.  Hurrah!  And on to The LOVE show  – come out this Saturday to the hell of downtown Austin.  Never mind the parking just take a cab .  Don’t miss the show. The Drag Kings are fabulous!  I’ll sing a little song or two and I’m sure there’s a surprise or two planned.  See you this Saturday and then who knows I might book another show some where soon.  xo Luna

Heads UP Australia I’m looking at you. That’s right Luna is on the loose and headed to Sydney.  Read the interview.  Come see the show.

We’re starting the night off right with Cocktails!  Luna might even have a new song.  So show up at Elysium and strap on something sexy while you’re dressing up for the evening.  Make a note we’re starting at 9:30 and playing one set  so don’t drag your sorry self up to me at 11 and whine about how you missed the show!

The Eveything’s Better in Drag Show

Who Said Vaudeville Was Dead?

The Everything’s Better in Drag Show

FRIDAY the 13th of May 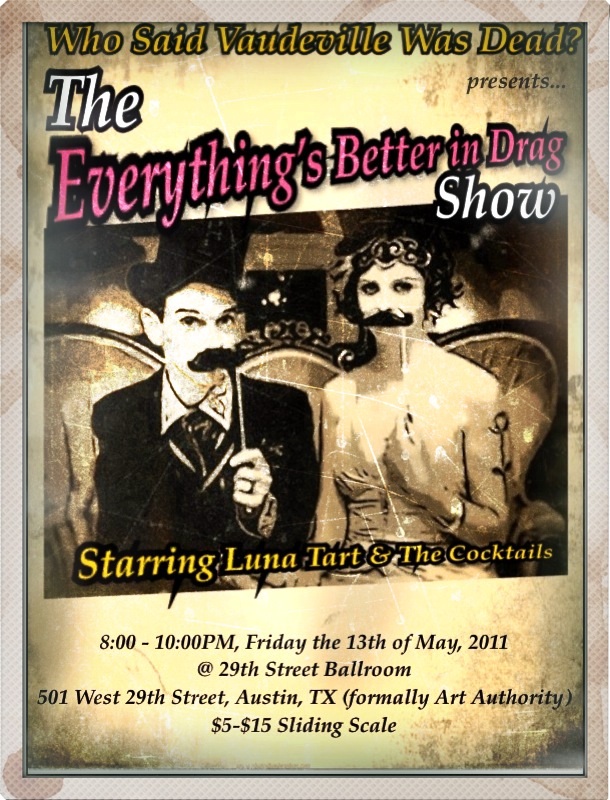 Put on your fake mustaches!  Luna Tart is gonna show you that Everything IS Better in Drag: music, comedy, and cabaret, included.  Queer Turkish Singer, Barcu Ozdemur and her gypsy band, There’s Something About Reptiles, are making their way from Vancouver to represent drag beyond the border.  Also get a taste of some local home-grown gender-bender stars, including performances from Austin’s premiere drag king troupe, Kings N’ Things.  Don’t be a drag, come out for the show!

Burcu Ozdemir & There’s Something About Reptiles